Atari800MacX now supports Synchronized Sound, a Graphical Debugger, VAPI and PRO images, Copy and Paste from the emulator, Configuration files, and a new Hard Disk emulation scheme. There have been other enhancments and bug fixes as well, see below.

As my time to work on Atari800MacX has decreased and been sporatic due to my work committments, I no longer feel correct about taking donations for it's development. However, if you would like to show your appreciation for old computer systems, the Internet Archive is a worthy charity.
If you would like to donate, please Donate through this link. 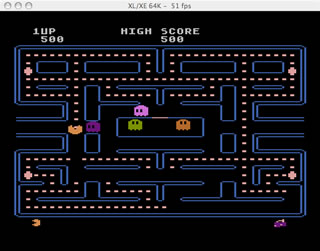 This is the home page of the Macintosh OS X Port of David Firth's Fantastic Atari 800 Emulator. I have ported the SDL version of the Atrari800 emulator to Mac OS X, and added a full native Cocoa interface, including Preferences, Menus, File Associations, Help and more. It does not require libSDL to be installed separately, but includes it within the application package. It does however require ROM image files from the original Atari systems, which are not included here. Special Thanks go to Jacek Poplawski for writing the general SDL port, and the entire libSDL team that has made this port possible. (As well as to the whole Atari800 team for their invaluable support and suggestions. Please visit their website at http://atari800.sourceforge.net for full info on their emulator core.) Many thanks to Daniel Noguerol for his hard work on the original and ported versions of the R: driver. Also thanks to Al Yarusso at AtariAge for mirroring the binary and source, and MacUpdate for mirroring the binary. And of course Dan and the rest of you who have sent in invaluable bug and testing reports.

Why did I write another Atari emulator for the Mac? Derek Ledbetter has a good port of Atari800 for OS9 and Carbon on OS X. However, I really wanted an emulator that could keep up with all of the features of the Atari800 emulator, including full cartridge and machine support, hard drives, etc. In addition, I wanted a full screen mode in addition to the windowed mode of Derek's port. Also, Derek's port is dependent on Code Warrior™, and I wanted an emulator that could be built with Apple's great free tools provided with MacOS X. Project Builder does not build Carbon executables for use on OS 9, so therefore there isn't an OS9 version.